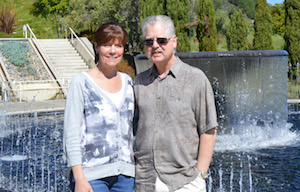 Martin T. Smith was born and raised in a small town, three miles from Shasta Lake. Although he came to Nevada for the summer of 1971, to earn money to begin college; he did not become an adopted Nevadan until 1981.

Martin met Valorie, his wife, at the Cal Neva Dealing School in Reno. Their first date was at the Reno Rodeo. One of Martin’s first jobs was teaching Fly Fishing for the Reno Rec. Dept.

Martin is proud to be a cancer survivor of three different cancers.  Martin is also a survivor of a major heart attack and many heart surgeries.

In 1986, Valorie and Martin started what would become The Flag Store of Nevada/The Flag Store, Sign & Banner. The business was started in a 300’ square foot office space with very little money and a lot of hope. The store has grown to be the largest manufacturer and dealer of flags and flagpoles in Nevada. The store stocks over half a million dollars of flag, flagpole and related merchandise.  The Flag Store has also become the place to shop for Made in Nevada gifts and Nevada shape gift baskets.

While recovering from heart surgery Martin decided he would create a Nevada Trivia board game.  After years of research and traveling, the game has become a reality and has been sold out for years.  When Martin’s kids practically dared him to write a book, Martin decided to take up the challenge.  Martin’s first book, “The Nevada Outhouse Trivia” book was published in 2006 and has since sold out.  Martin was never happy with the first book and although the book was successful he was determined to write a new and better book.  In October of 2017 Martin’s new book became a reality and is being offered for sale.  His new book “Battle Born Nevada Trivia” is without a doubt the best book ever written of its’ kind.  The book has over entertaining short stories about the people and places of Nevada including some personal family stories.

A Word From the Creator of the Nevada Trivia Game, Martin T. Smith

I cannot express to you how much I have enjoyed traveling with my wife and family to so many unique towns in Nevada. It has been a labor of love to explore the many wonderful places of Nevada; digging up trivia questions and stories along the way.

There are many people who have made my dreams of creating and producing the Nevada Trivia game and both my books. My wife Valorie who has endured a “few” inconveniences for me to achieve my obsession.  Thank you to my wife Valorie, my son Eric and my daughter Jamie for helping with the creation of the game, the books and web site. Kudos’ also to David Gill, my friend and web guru for helping achieve my dreams.

To Norm Nielson who died before his time. Norm was an adopted Nevadan like myself. My love of Nevada, Nevada’s Western Lifestyle and my love of the people of Nevada were stimulated by reading Norm’s books, and knowing Norm himself. I’m honored to have called Norm my friend and I hope he approves of what I have done so far.