throat. The iris is yellow, except the amber-eyed South American Great Horned Owl (B. V. nacurutu). Its “horns” are neither ears nor horns, simply tufts of feathers. The underparts are light with brown barring; the upper parts are mottled brown. The legs and feet are covered in feathers up to the talons. There are individual and regional variations in color; birds from the sub-Arctic are a washed-out, light-buff color, while those from Central America can be a dark chocolate brown.

CLASSIFICATION:
Raptor or bird of prey

DESCRIPTION:
In general they have brown body plumage with white throat feathers. The belly and breast have dark horizontal bars. They have large ear tufts that are set far apart on the head. Their facial disk may range from gray to an orange-tan. They have large yellow eyes with black pupils.

LIFE SPAN :
They can live to 30 years in captivity, though in the wild the average is 10 to 15 years.

HABITAT:
They live in a wide variety of habitats ranging from desert canyons to mountain forests. They nest in trees near open areas. They are often found in city parks, urban areas and associated with agriculture.

RANGE:
They are found throughout North America including Canada, Alaska, the lower 48 states and Mexico. Its range extends through most of South America. 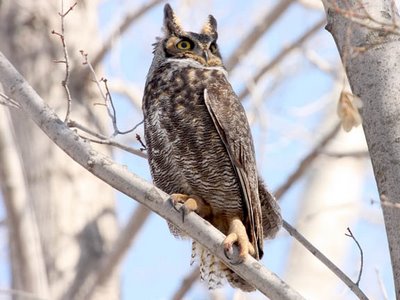 NATURAL HISTORY:
Great horned owls roost during the day in protected rocky cavities or on tree limbs. They can rotate their heads up to 270 degrees. They hunt by perching on limbs, rooftops or cliffs listening for sounds of prey. Once the prey is located it swoops silently down and pounces on its prey. They are territorial, with a range of approximately one square mile. They are solitary birds, spending time with their mate only during mating and nesting season.

BREEDING:
The great horned owl mates and nests earlier than most birds to occupy nests that other birds have built, since it doesn’t build its own nests. It generally lays two to four eggs, two days apart. They hatch after approximately 35 days. The birds are fed by both parents and fledge at approximately 10 weeks.

REASON FOR STATUS:
The treaty was developed by U.S., Canada and Mexico to protect breeding birds across international borders.

MANAGEMENT & CONSERVATION:
Populations being monitored by the Diversity Bureau of NDOW.

FUN FACTS:
Great horned owls are Nevada’s largest nocturnal bird of prey. If the great horned owl was as big as a human, its eyes would be the size of oranges. Its ears are not symmetrical. The right ear is often larger and higher up on the head than the left ear. By turning and tilting its head until the sound is of equal value in both ears, great horned owls can locate their prey by sound only.