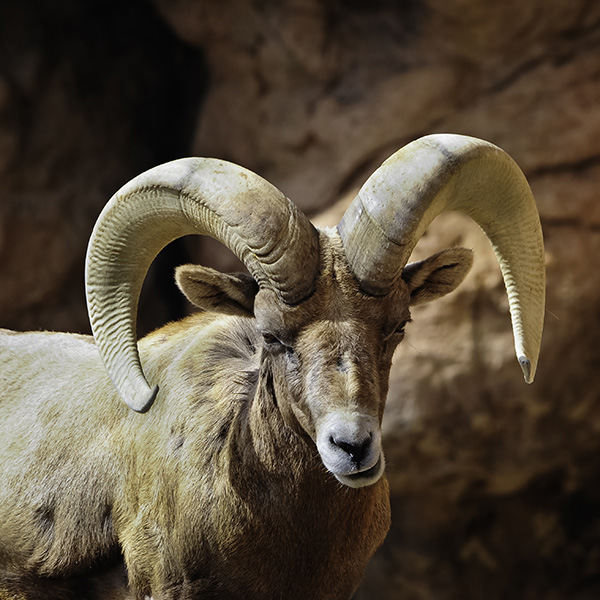 The most conspicuous feature of the Desert Bighorn sheep is the large brown horns that continue to grow. Both rams (males) and ewes (females) have horns, though the horns of rams are much bigger and more curved. Each horn is in a “c” shape known as a “curl”. The horns are permanent and consist of a sheath of keratin (a hard protein found in fingernails and hair) covering a boney core.

Habitat:
Typical Desert Bighorn terrain is rough, rocky and steep, broken up by canyons and washes. This type of terrain affords them the advantage in coping with predation. Desert Bighorns live in regions of the state marked by hot summers and little annual precipitation. Bighorn sheep require access to freestanding water during summer months, and in drought conditions they may water throughout the year.

Desert Bighorns are located in mountain ranges throughout the southwest. Besides the southern region of Nevada, populations exist in Arizona, southeast California, Colorado, New Mexico, Utah, Texas and Mexico.

The number of Desert Bighorn sheep in North America in pristine times is unknown, but most likely in the tens of thousands. By 1960, the overall population in the United States had dwindled to 6,700 – 8,100. These declines were attributed to excessive hunting, competition and diseases from domestic livestock, particularly domestic sheep; usurpation of watering areas and critical range by human activities; and human-induced habitat changes. Since 1960, after the adoption of conservation measures, the population trends have been upwards. In 1993 the population estimate was 18,956 – 19,040.

Desert Bighorns are herbivores. Their diet varies with habitat and seasons, but they prefer to eat grasses, forbs, when available, and shrubs.

The breeding season or rut generally extends from july through september. In each band of rams there is a dominance order. This order is determined in several ways which could include the rams clashing heads in a fight. The dominant males do most of the breeding. Bighorn sheep have an approximate 6 month gestation period with most ewes giving birth to one lamb per year.

Management strategies have been implemented to maintain or enhance desert bighorn populations. Transplants have been highly successful in some areas. Aggressive programs to stop poaching have been effective, and hunting is strictly regulated. Wildlife agencies and conservation organizations are involved in habitat improvement projects that include building water developments.

Water developments have been and continue to be constructed in habitats deemed deficient in water. Although rams may go 3 days without water, ewes and lambs come to water holes almost daily during the hot, dry summer months. During the rutting season in july through september, dominance among rams is established in contests in which two rams may clash horns. It has been estimated rams may meet head-on at a combined speed of approximately 30 mph.