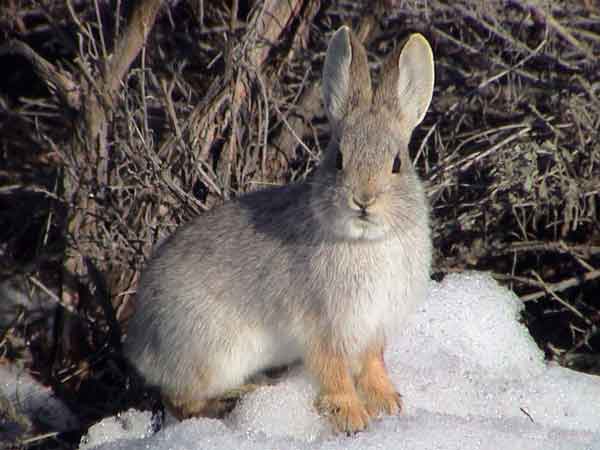 The fur is brown to slate gray in color, depending on the season. The ears are short with a white margin, and the tail is small.

The pygmy rabbit is found in shrubland habitats, typically in dense stands of old-growth sagebrush. It digs burrows in deep, loose soil.

Unlike other rabbits that use burrows dug by other animals, pygmy rabbits dig their own burrows, which may have three or more entrances. They also tunnel through the snow in winter. Pygmy rabbits are capable of making several types of vocalizations. They are active throughout the year in day or night, mainly at dusk and dawn. Predators of the pygmy rabbit include weasels, coyotes, raptors, badgers, bobcats, and humans.

The pygmy rabbit is an herbivore, a plant eater. The main food source is sagebrush, but some grasses and forbs may also be eaten in summer.

Breeding occurs in spring and early summer. The gestation period is 27 – 30 days and six young may be born.

Pygmy rabbits are considered a Species of Special Concern in Nevada. The Washington subspecies is endangered.

Field surveys are currently being conducted to determine the abundance and distribution of pygmy rabbits in northern and central Nevada. Protection of old-growth sagebrush is the most effective and practical means of managing and conserving pygmy rabbits at the present.

The pygmy rabbit is the smallest native rabbit in North America and can fit in the palm of a hand!

Information above provided by the Nevada Department of Wildlife.