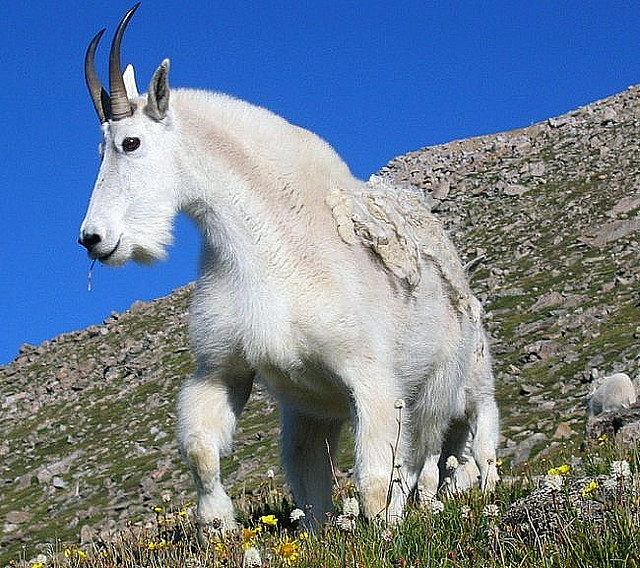 SIZE: Rocky Mountain goats are approximately two and a half to three feet tall at the shoulder and four and a half to five feet long. They weigh between 200 and 250 pounds, though the heaviest recorded goat was around 500 pounds.

During the summer, they have a short white wooly coat. A small ridge of hair along the back of the neck forms a hump and there is a beard on the chin. In the winter, the fur becomes long and shaggy and has a yellowish hue. Both sexes have black slightly curved horns that grow between eight and ten inches.

They can live up to 18 years in the wild.

Their habitat includes steep rocky cliffs, projecting pinnacles, ledges and talus slides. Their summer range is typically above 9,500 feet. Nannies with young will be found in lush alpine meadow complexes.

Western Canada and the northwestern United States. In Nevada, they are found only in the Ruby Mountains and East Humboldt Range.

The primary social unit is a band consisting of one or more nannies and their kids as well as offspring from the previous year. Adult males are generally solitary during the summer but can be found in groups of two to five animals. Billie’s and nannies generally don’t mix, but can be found in the same general locales.

They eat primarily sedges and grasses in the summer, and leaves and coniferous trees in the winter.

Mating occurs from November to January with a gestation period of 175-180 days. Birth generally takes place in late May and early June with one and sometimes two kids.

Protected as a game species.

They were introduced into the Ruby Mountains in the mid 1960’s with the release of 12 goats obtained from Washington State. In 1981, 11 goats, also obtained from Washington, were released into the East Humboldt mountain range. As of 2003, there are approximately 100 animals in the East Humboldt’s and 250 animals in the Ruby Mountains. They are hunted in limited numbers as a big game animal.

Mountain goats are known for their exceptional agility and speed. They can climb almost 1500 vertical feet in just 20 minutes. Their hooves are soft and curved so that they act like suction cups on steep rocky terrain. The kids are able to walk and jump around only 10 minutes after being born.