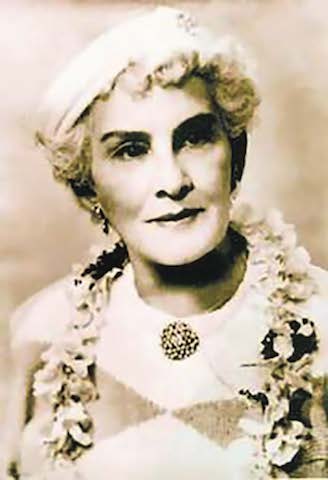 I had some requests to run the story, How and Why “Home Means Nevada” came to be written again. The story is written by Bertha Raffetto herself and I think you will find it as interesting as I did.

In her own words:

“In the summer of 1932, NEVADA NATIVE DAUGHTERS invited me to sing a Nevada song of my choice at their annual picnic at Bowers’ Mansion in August of that year. I accepted that invitation with considerable pleasure.

While I found many lovely Nevada songs, none of them expressed my admiration, esteem and affection for Nevada. Then I recalled that several years prior, I had written a song of Nevada. That manuscript had been laid aside because it did not fulfill the demands of my deep desire to express, musically and lyrically, my truest emotions for the Battle Born State–Nevada.

I wanted to express in a simple, natural style, those enduring and homely qualities I had found in Nevada–the same qualities one finds in a good home–beauty, joy and security. During the lapse of time between my first notes of this song and the year of 1932, I had made considerable progress in my musical and lyrical studies, and felt I could now revise the manuscript to my satisfaction. I set about the work with renewed interest.

However, I had scarcely assembled my old notes when unexpected and very welcome house guests arrived. In haste, I marked my calendar incorrectly. Two weeks of fun passed by, and on the morning my guests were leaving, I read on my calendar that the Native Daughter’s picnic was to be celebrated the next day. Not one note of that song I had promised to sing had been written.

Before ten o’clock that Saturday morning, I flew to the piano before my friends’ automobile had turned the corner. I did not wonder if I could write that song, I was sure that I could; was sure of my technique; sure of precisely what I wanted to express. It really isn’t difficult to say “I love you,” to an adored one whom you have known and loved for a long, long time……so long that your heart is very close to your lips.

From ten a.m. that Saturday, until four a.m. the next morning, I wrote without stopping. Then, happy and satisfied, I laid aside the first verse and chorus of my song and retired. That same afternoon, I sang and played from a lead pencil script, “Home Means Nevada,” on the front balcony of Bowers’ Mansion.

The song was so beautifully received that my heart still glows with gratitude for that Nevada-loving audience. As I arose from the piano, a very distinguished looking elderly gentleman slowly raised up from where he was sitting behind me and barred my exit from the platform. He propped his gold-headed ebony cane against the old square piano, removed his high topper from his leonine-head, and, looking every inch the statesman, said to me, “Honey, that’s the prettiest Nevada song that I have ever heard. It should be made the State Song of Nevada!” Then, he placed his trembling hands upon my shoulders and kissed me on one cheek and then the other.

That gentleman was the Honorable Roswell K. Colcord, a great former governor of the great state of Nevada, 1891-1894. A few moments later, the Honorable Morley Griswold, Lieutenant Governor, 1925-35, and Acting Governor, 1934-35, of Nevada, echoed the sentiments expressed by Ex-Governor Colcord. Many more similar expressions from those present followed in swift succession.

This is the true story of why, when, and how I wrote “Homes Means Nevada.” The rest is history and may be found in the Statutes of Nevada, 1933, under the caption of Senate Bill No. 7 (adopted February 6, 1933).

I believe other facts regarding this song should be made of record and known at this time. I append a few such facts:

While I was and am convinced that I wrote a song that was both musically and lyrically sound, that it was very singable, and that it appealed to as many as had heard it, there remained a majority of Nevada’s citizens who had had little opportunity to hear and judge that song before it went to the legislature. With limited means, I did all I could to counter that deficit. I sang the song, whenever requested–an actual count of 187 times in three months! Finally, the song went to the Nevada Legislature, accompanied by an imposing file of endorsements from people in all walks of life–even an extra letter from Al Greenbaum, Secretary of the National Musicians Union; he was, at that time, a resident of Nevada. How proud I was to sing for both houses of the legislature, and how deeply I was moved by the honors accorded me before they adopted unanimously “Home Means Nevada” as the official state song!

Because of a widely prevalent and absolutely erroneous impression that must still be in the public mind, it pops up so frequently, I wish to dispell forever the implication that I have ever received any compensation from the State of Nevada for the song; it should be remembered that the world was in the throes of depression in 1932-33, and Nevada was no exception.

I did not request payment for this song, nor did I receive any payment–other than the personal satisfaction that accrues from contribution to cultural progress. How abhorrant it would have been to me, to ask money for a song when so many were needing bread!!

Mrs. Charles McDonald of Reno, daughter of Mrs. Raffetto, graciously gave the Nevada State Library permission to reproduce and distribute copies of these notes prepared by Mrs. Raffetto on May 29, 1949.

OFFICIAL SONG OF THE STATE OF NEVADA

Way out in the land of the setting sun,

Where the wind blows wild and free,

There’s a lovely spot, just the only one

That means home sweet home to me.

Until desert meets the hills,

Oh you certainly will agree with me,

It’s the place of a thousand thrills.

Home means the sage and the pine.

Out by the Truckee, silvery rills,

Out where the sun always shines,

Here is the land which I love the best,

Fairer than all I can see.

Deep in the heart of the golden west

Home means Nevada to me.

Whenever the sun at the close of day,

Colors all the western sky,

Oh my heart returns to the desert grey

And the mountains tow’ring high.

Where the moon beams play in shadowed glen,

With the spotted fawn and doe,

All the live long night until morning light,

Is the loveliest place I know.

Home means the sage and the pines.

Out by the Truckee’s silvery rills,

Out where the sun always shines,

There is the land that I love the best,

Fairer than all I can see.

Right in the heart of the golden west

Home means Nevada to me.