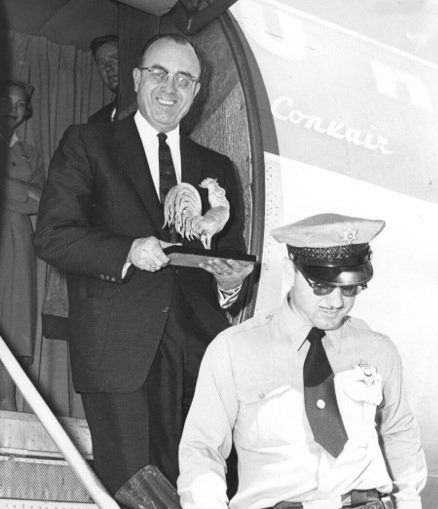 Richard “Dick” Graves was a native of Idaho where he owned a slot route, but when Idaho outlawed gambling, Dick moved to Reno and bought a partnership in The Nugget on South Virginia Street and he also opened the first casino in Yerrington.  Graves purchased a 60 stool cafe in Sparks and installed 50 slot machines and brought in a young John Ascuaga to run the cafe.  The most popular item on the menu was the now famous Awful-Awful hamburger.

In 1958 The Nugget moved across the street and Dick opened “Trader Dicks” restaurant which had some slot machines, but next door at the Nugget was a full casino.  When Dick Graves opened the casino in Sparks most people thought he was nuts, you see Sparks at that time was considered a Hick Town.

Dick Graves was the first casino owner to realize that slot machines were the future of modern gaming.  He was first to provide gambling patrons with a bright clean gambling atmosphere instead of the dingy dark casinos of the day.

Dick Graves’ marketing abilities have always been underestimated.  He was the first to use the concept of offering inexpensive and good food to attract customers to his casino.

Dick was the person that purchased the now famous Bertha the elephant, who was the main attraction at many Nevada Day parades.  Dick soon built the Circus Room at the Nugget for Bertha to perform in.

The success of the Nugget allowed Dick to open a top of the line restaurant called the “Golden Rooster” where he displayed a 15 pound solid gold rooster designed and made by a San Francisco Jeweler.  The gold rooster started quite a stir when the Treasury department claimed the rooster was a violation of the 1934 act that limited anyone from owning more than 50 ounces of gold.  The rooster was finally vindicated but not after Dick Graves milked the controversy for all the publicity he could get.

One of Dick’s most famous marketing events was when he hired “Happy” Bill Howard in 1955 to sit on a 6′ wide platform sixty feet in the air in the Nugget parking lot on a flagpole to try to break his own record.  Howard did break the record and sat for 204 days.  When Howard came down from the flagpole Dick Graves paid him 5,000 dollars in cash.

Dick Graves sold his casino to John Ascuaga in 1960 for $3.75 million dollars.  On that day Dick Graves told the crowd “that he didn’t want to be the richest man in the cemetery”.