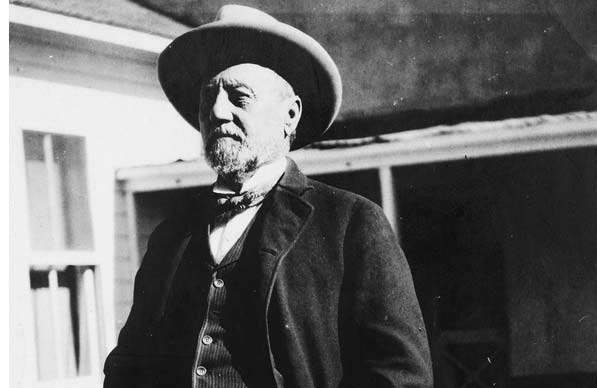 If you are scratching your head right now thinking that you’ve heard the name of Henry Hooker, you probably have.

Henry Hooker was played by Charlton Heston in the movie Tombstone. In real life Henry Hooker was a wealthy cattleman and a friend of Lawman Wyatt Earp. Henry helped Wyatt in his movement against “The Cowboys”.

Henry wasn’t always a rich cattleman though. In the 1860’s Henry moved to Hangtown, California; now called Placerville. Henry started and operated a mercantile business there selling supplies to the miners. Once in a while Henry would buy and drive cattle over the Sierra to sell in Carson City or Genoa.

Business was good and the Hooker’s business flourished. Henry would marry and start to raise a family in the area.

On August 10, 1865 a fire destroyed his entire business and much of Hangtown. Henry and his family were left with the clothes on their back and about $1,000.00 dollars, which Henry had stashed away.

Henry pondered different ideas that would regain enough money if successful to start another business to support his family.

Knowing that miners working on the Comstock didn’t have many food choices and that if given an alternative the miners would pay top dollar for something different to eat, Henry had an idea that most people would consider very odd. Henry was convinced that if he set out and purchased 500 turkeys he could herd them over the Sierra to sell in Carson City.

Henry traveled from ranch to ranch offering $1.50 for every turkey. The ranchers of course thought Henry was crazy, but $1.50 for each turkey was a fair price and in no time Henry had his 500 turkeys.

To help him herd the turkeys he bought two dogs and hired one man. Determined, Henry started his journey.

Surprisingly most of the trip went without many problems, until Henry was on the last leg of his trip. Toward the valley floor there was just one more hill to get the birds over and that’s when all hell broke loose.

The turkey’s refused to budge. The dogs and Henry pressured them to move up the hill but instead of cooperating all of the turkeys took off in a panic flight. The turkeys were flying everywhere. It was pure pandemonium!

As you can imagine Henry was devastated as he had just watched all his money fly away. But luck was on Henry’s side that day. Once the turkeys landed they started gathering together as turkeys do and Henry’s dogs found the birds roosting on the valley floor.

Henry, almost beside himself, gathered the birds and drove them right through the middle of Carson City. Henry sold every turkey for $5.00 each and in one crazy venture, Henry was back financially.

The Henry Hooker Turkey Venture was the beginning of many successful businesses for Henry Hooker. Henry invested the money he made in the turkey venture into raising cattle and supplying beef to the U.S. Army posts and Indian agencies in Arizona.

Henry would purchase the now famous Sierra Bonita Ranch located in the Sulphur Spring Valley in Graham and Cochise Counties of Arizona. The Sierra Bonita Ranch would become the first and largest permanent American cattle ranch in Arizona; spanning 800 square miles. Over the years Henry would be noted for breeding some of the best cattle and horses in the country.

Henry and his ranch would become a part of history in his support of Lawman Wyatt Earp’s vendetta ride against the “Cowboys,” offering his ranch to rest and supply the Earp posse. Later Henry became a trusted friend of Cochise the Apache Indian Chief.

Henry Clay Hooker’s influence on historical events in the old west would have never been possible were it not for his crazy idea of herding turkeys to Nevada miners.