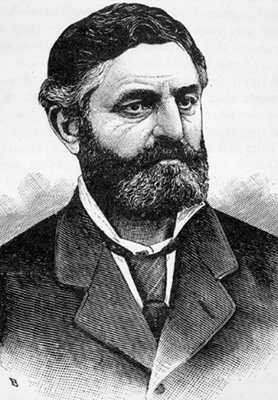 If you are old enough to remember watching “Bonanza” on television, or perhaps if you had a good Nevada history teacher, you may have heard of Philip Deideshesheimer.

Appropriately for Nevadans, on October 31, 1959 the television series Bonanza aired an episode about Philip Deidesheimer. Although not perfect, the episode was pretty accurate in its portrayal of Deidesheimer.

Today, Nevada history teachers seldom discuss the German Engineer, which is a shame in my opinion. Philip Deidesheimer as you will read, had more influence on Nevada’s future than anyone in Nevada history.

Philip came to America as a graduate of a prestigious German mining school. Reading about the new-found gold and silver strikes in northern California and Nevada, Philip, as many immigrants did, set out to make his fortune.

The mining method of choice was Placer mining, where miners would take their dirt and use sluice boxes and water to wash away the dirt to get to the gold. Larger companies used giant water cannons and blasted entire hillsides to find their gold.

At the ripe old age of twenty-eight Philip was hired by a group of mine owners from the Comstock in Nevada. Huge veins of silver had been discovered on the Comstock but the richest veins of silver were deep underground. This required digging shafts and tunnels deep into the ground.

In the attempt of getting to the ore a staggering number of cave-ins, deaths and injuries were occurring. This made the extraction of the ore too costly and dangerous. Mining accidents were so rampant that a miner would be killed or injured every day on the Comstock. Being a miner was a very dangerous profession.

Philip had a reputation as a brilliant engineer and the mine owners were hopeful that Phillip could find a solution to their cave-in problems. He was hired by the Ophir Mine in attempt to solve their problems.

Philip set out to build a new method of bracing timbers to shore up the mining walls but after many designs and weeks of work, every attempt had been a failure.

Philip began to get frustrated from his failures. One day he decided to take a break and go for a walk. His walk took him through blooming sagebrush where Philip started watching a honey bee working the sagebrush flowers. Somewhat mesmerized by the bee he followed the little bee for a time until the bee reached its home, a bee hive. As if he had been struck by lightning Philip knew the answer to the problem.

Within weeks Philip would design a revolutionary bracing system designed, of course, after a honey comb. The design would be dubbed “The Square Set.”

The plan was to frame timbers and put them together so that they would give support from all sides and angles. Under Philip’s supervision and using the new Square Set design the Ophir mine would become one of the richest mines in American history.

The young engineer not only allowed all the other mines on the Comstock to use his Square Set system, he would lend his carpenters to show them how to make the timber structures.

Sadly, Philip never patented his design and would eventually die in relative obscurity and poor.

The impact of Philip Deidesheimer’s Square Set design not only revolutionized underground mining forever but it allowed Nevada mines to operate successfully. His design would also save thousands of miner’s lives and countless injuries.

To think that this monumental achievement began as an idea from one lone honey bee is staggering. There should be statues, buildings and in my opinion a Nevada holiday in his honor. Sadly, Philip Deidesheimer has all but been forgotten.