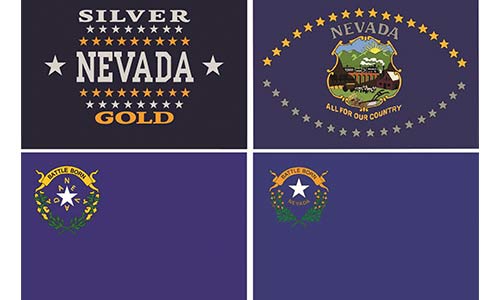 In actuality, just like in Nevada, many states did not adopt flags until the end of the 19th or the first part of the 20th century.

After the Civil War ended not many people were anxious to show pride in individual state’s rights or state independence. Consequently, the creation of state flags was not a priority; in fact it was frowned upon. But with the beginning of a new 20 century came a resurgence of American pride and patriotism. This resurgence of patriotism, which up until then was reserved mostly for men, would help rekindle the fight for voting rights for women and for the first time there was an acceptance of women showing national pride.

Organizations such as the National Society of the Daughters of the American Revolution were formed to promote patriotism and civic pride and many of the members were also in favor of voting rights for women. The suffrage groups would use the state flag as a rallying symbol in each state to pass women’s voting rights laws. Other groups used the state flags to promote civic pride and patriotism.

No other group or organization is more responsible for promoting and creating so many of our beautiful state flags in America than the National Society of the Daughters of the American Revolution. 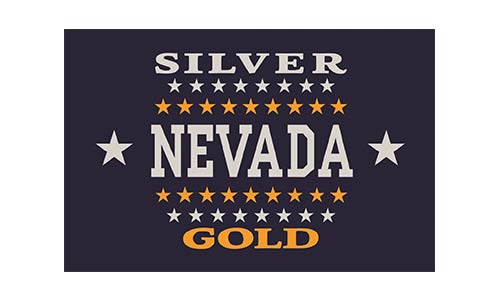 The blue color was the same color as the blue field of the American Flag, (Old Glory Blue) to depict our loyalty to the Union. The 36 stars in the flag indicated we were the 36th State in the Union.

No original is known to exist. 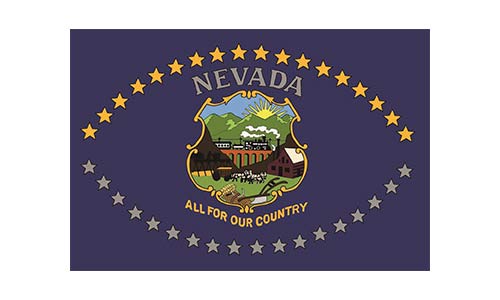 The second Nevada flag, “All for Our Country” was designed by Miss Clara Crisler, a Carson City educator and historian, in 1915.

Crisler’s design was an attempt at having a state flag more representative of Nevada. Using the State Seal as the main basis of the flag, it depicted a Nevada that embraced mining, industry, agriculture and its history.

Like the first state flag of 1905 the background color of the “All for Our Country” flag would remain Old Glory Blue to show our loyalty to the Union. The 36 stars showed that we were the 36th state in the union. The silver and gold colors of the stars referred to our large silver and gold resources.

Below the seal was featured our beloved state motto, “All for Our Country”. Overall the flag had more than 35 colors in the design, which would be the reason for its demise.

Although the flag was beautiful and very popular, producing it was too expensive.

The method of ‘screen’ printing was used at that time, but the printing of 37 or more colors on a flag was difficult and too time-consuming for the process. The flag design had too much detail for it to be appliquéd/ sewn, so some of the flags were painted by hand. However, the flag painter had to paint two flags and then sew them together to make one two-sided flag, which proved to be very expensive also.

The “All for Our Country” flag was displayed on the Battleship USS Nevada until the vessel was decommissioned in 1945. One of the flags from the USS Nevada has been saved and can be seen from time to time at the Nevada State Museum in Carson City.

Because of the expense involved in producing the “All for our Country” state flag, it was short lived and only a few originals exist. 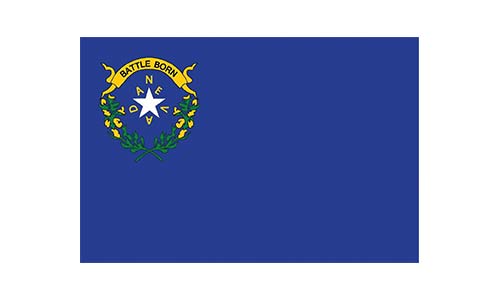 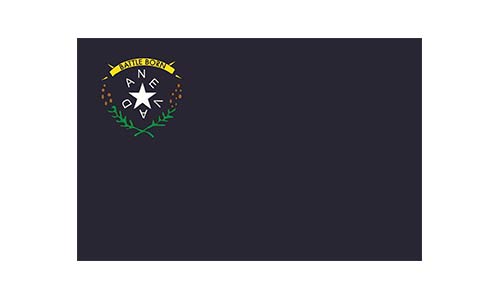 The third Nevada flag was chosen through a statewide contest to find a design that was less expensive to produce. The design chosen was submitted by Don Shellbach III in 1929. The flag remained in use until 1991.

The flag background color chosen was cobalt blue, which is a color most would associate with royal blue. Because cobalt blue is not actually a specific color some manufacturers made the background the same color as the field of the American flag. Others made them different shades of blue. Regardless, the blue color of the flag symbolizes our loyalty to the United States.

The star indicates that we are the “Silver State” and the words “Battle Born” remind us that we became a state during the Civil War. The sagebrush sprays under the star represent our state flower and symbol. The word Nevada was spelled around the star on the flag.

Because there weren’t any specifications written for the flag, every flag manufacturer made the flags differently and claimed its design was correct.

In the 1980’s the Nevada State Purchasing Department attempted to standardize how the flags were manufactured and required a specific blue color for them. 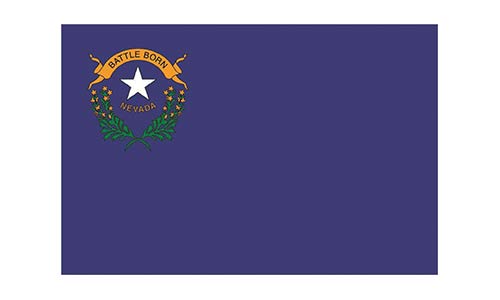 The amendment was proposed to correct a mistake in what the legislators felt was the intent of the 1929 flag legislation. The amendment would place the word “Nevada” below the star and above the sprays of sagebrush in a semi-circular pattern which would make “Nevada” on the flag more readable.

The Raggio flag amendment would also – for the first time – determine specific colors for the flag and the type of material and printing method to be used in its manufacture.

The background color chosen was Pantone 286 blue… what most people now call a royal blue. Specific Pantone colors were also chosen for the other colors in the flag.

There were other flag experts who thought the entire flag should be scrapped so they could pick an entirely new state flag that would have a symbol-based flag design without seals or wording on it; like the Alaska, Texas, Arizona, Colorado, and New Mexico flags.

Although I did not get my way on the blue color of the flag and others didn’t get their way on a new “symbol” flag, we all were pleased that for the first time, actual specifications for the flag were established. The amendment was approved in 1991 and our current flag was the result.

Although I herald the 1991 flag amendment that set forth Nevada flag specifications for the first time, these specifications are not being enforced. There is a barrage of cheap and inferior Nevada flags being imported and sold that do not comply with the flag statute. This is bad for a number of reasons.

Imported flags are cheaply made and inferior to Americanmade Nevada flags but more importantly the designs, materials, colors and methods of printing do not compare well with the better quality, longer-lasting and correctly designed flags made by American manufacturers.

As a final note of interest, the 1905 “Silver & Gold” flag has been reproduced by our company for over thirty years… but not until a technology breakthrough a few years ago were we able able to reproduce the 1915 “All for our Country” flag. All four Nevada flags are now available.